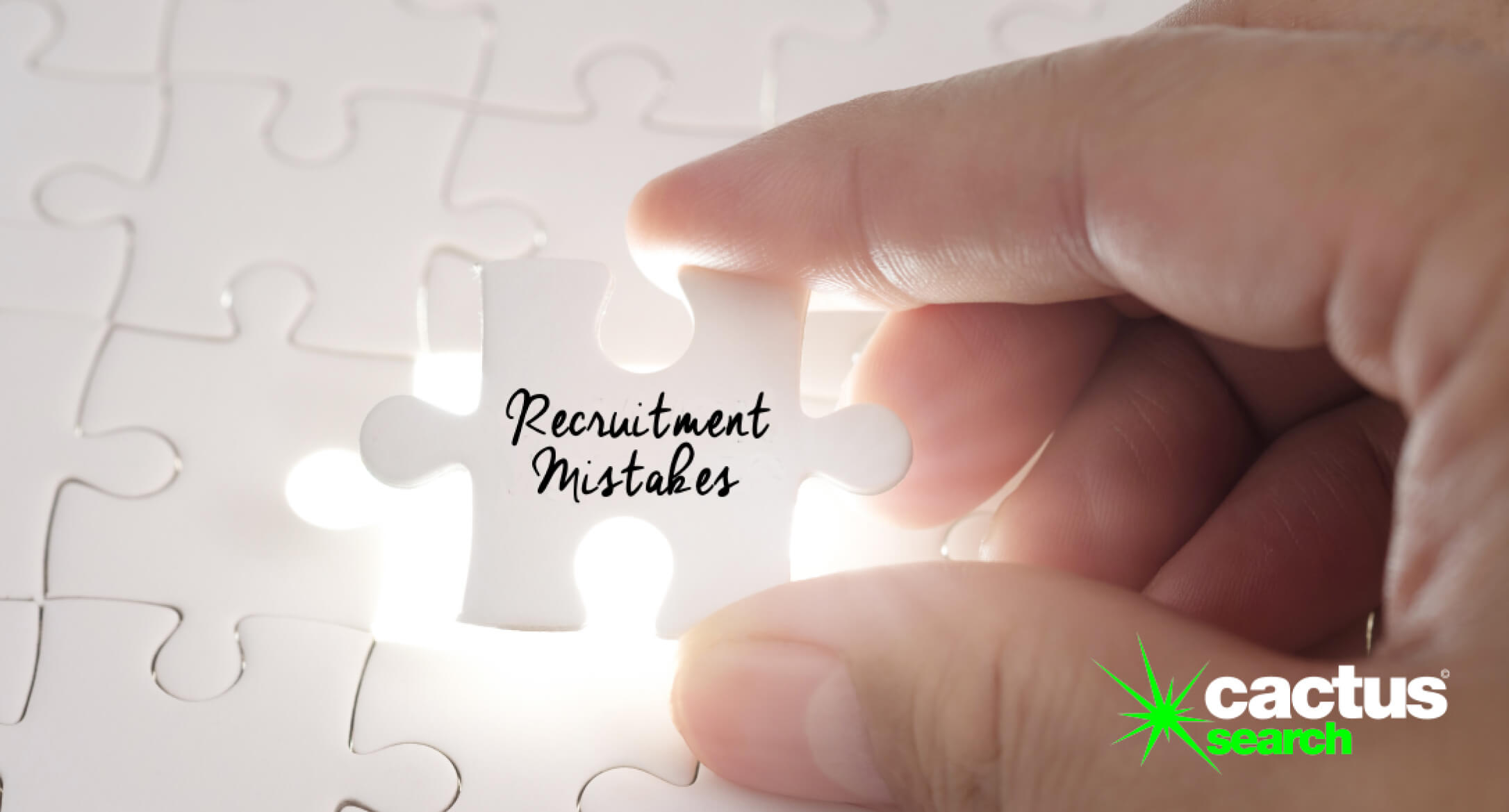 The cost of getting recruitment wrong isn’t a pretty sight. It absorbs money, wastes time, drains morale, affects productivity, damages your reputation, and, well, quite frankly, it’s just a pain in the rear end for everyone involved.

No-one wants to plough hours of time and hundreds of pounds into recruiting someone, only for them to leave, you to realise they’re not the right fit, or to just not attract the right pool of candidates from the outset.

If any or all of this is ringing true for you, here are seven mistakes that could be contributing to the problem.

As with anything in life, you get what you pay for. The same way you rate your skills, candidates rate theirs too; so don’t expect to attract top dollar talent with below-market salaries, and if you do, don’t be surprised if they a) leave as soon as a better offer comes along, and/or b) don’t put in the discretionary effort you’d hoped for.

If your current pay package is a basic salary plus a bonus and/or commission, scrap the bonus or commission and make the set pay more competitive. The employee will benefit from a more steady and worthwhile income, and, providing you manage their performance closely, much to most people’s surprise, you won’t be left out of pocket in the long run.

Playing hard to get doesn’t fly in this day and age. Unemployment levels are the lowest they’ve been since the 1970s, so it’s no longer a case of candidates queueing round the block to land a position in your call centre - well, unless you’re offering double the pay for half the hours, maybe.

The tables have turned and if you want to secure the very best staff you’ve got to move quick, and that means:

As the good old saying goes ‘you snooze you lose’, and this couldn’t be truer in today’s competitive recruitment market.

This one might divide opinion but bear with us.

Holding an interview or assessment day at 9am Monday morning, last thing on a Friday, or the day after a World Cup final is only going to increase your dropout rate.

We get you’re looking for people who have the right attributes and attitude for your business and someone who isn’t willing to get crawl out of bed to impress you first thing in the morning might go against that, but it’s on you to make the recruitment process as easy as possible for individuals to attend - so do just that.

Here are some other slots you might want to avoid too:

Also, bear in mind some candidates will be covertly taking time out from their current job to apply for yours, so try to be as flexible as you can to accommodate their availability.

So, odds are, they’re not going to be able to sign up to a week or two of 9-5 inductions and training sessions without putting themselves out. To stop this from being a deterrent try and tailor the employee’s first few weeks to their standard hours and show you’re an employer who puts its people first.

On the other hand, make sure your training is robust enough to provide your employees with all the tools they require to perform well in the job.  Many employees who leave in the first 3 months, often cite a lack of training, which in turn creates a lack of confidence in their ability to handle calls effectively.

Are you asking candidates to return a handful of times and jump one too many hurdles before you make a decision? If so, could you condense your current recruitment process into one, or at the most two, sittings? If the answer’s yes, do it.

As much as they want the job, everyone has their limits and there’s only so much time and effort people will put in before accepting a role elsewhere - with a company who saw someone they wanted and seized the opportunity sooner rather than later.

Whether it’s their passport, driving licence or utility bill, if you need to see certain documents before a candidate can start ask them to bring the paperwork along to their interview. This’ll avoid them having to make an extra trip in after you’ve offered them the job, which, whether you like it or not, could impact starting rates.

If you’ve offered someone a job don’t go silent straight after, it can make you look uninterested - especially if they’ve got a long notice period.

From new recruiters reaching out and past companies coming back on the scene, a lot can happen in between your offer and the candidate’s scheduled start date, so don’t compound the issue by going silent and casting doubt on their decision.

To combat this, start your onboarding early and keep them keen by:

One thing to be cautious of is striking the right balance. On the one hand you don’t want to look apathetic, but on the other, you don’t want to make them feel bombarded, or like you’re asking too much of them before they even start.

Keep your emails casual and if you do invite them to something make sure they know there’s no pressure to say yes.

If you need a hand securing your next Team Leader, Project Manager or Data Analyst - and everything else in between, you’ve read the right blog and landed on the right site. To see how we can help take your recruitment efforts to the next level get in touch with the team on info@cactussearch.com or 01905 330 790 today.